Airing on HRTV on Christmas day was a segment about the Mangalarga Marchador!   We have copies of the TV show available if you would like a copy of the show.

Send in only $3.99 (includes shipping!)        Please remember to include your mailing address when you buy using paypal.

An overview of the Mangalarga Marchador horse and 2 of the early importers of the Marchador to the U.S. – Flying Oaks Ranch, Oklahoma and Summerwind Marchadors, Arizona.  Produced by HorseFlicks. 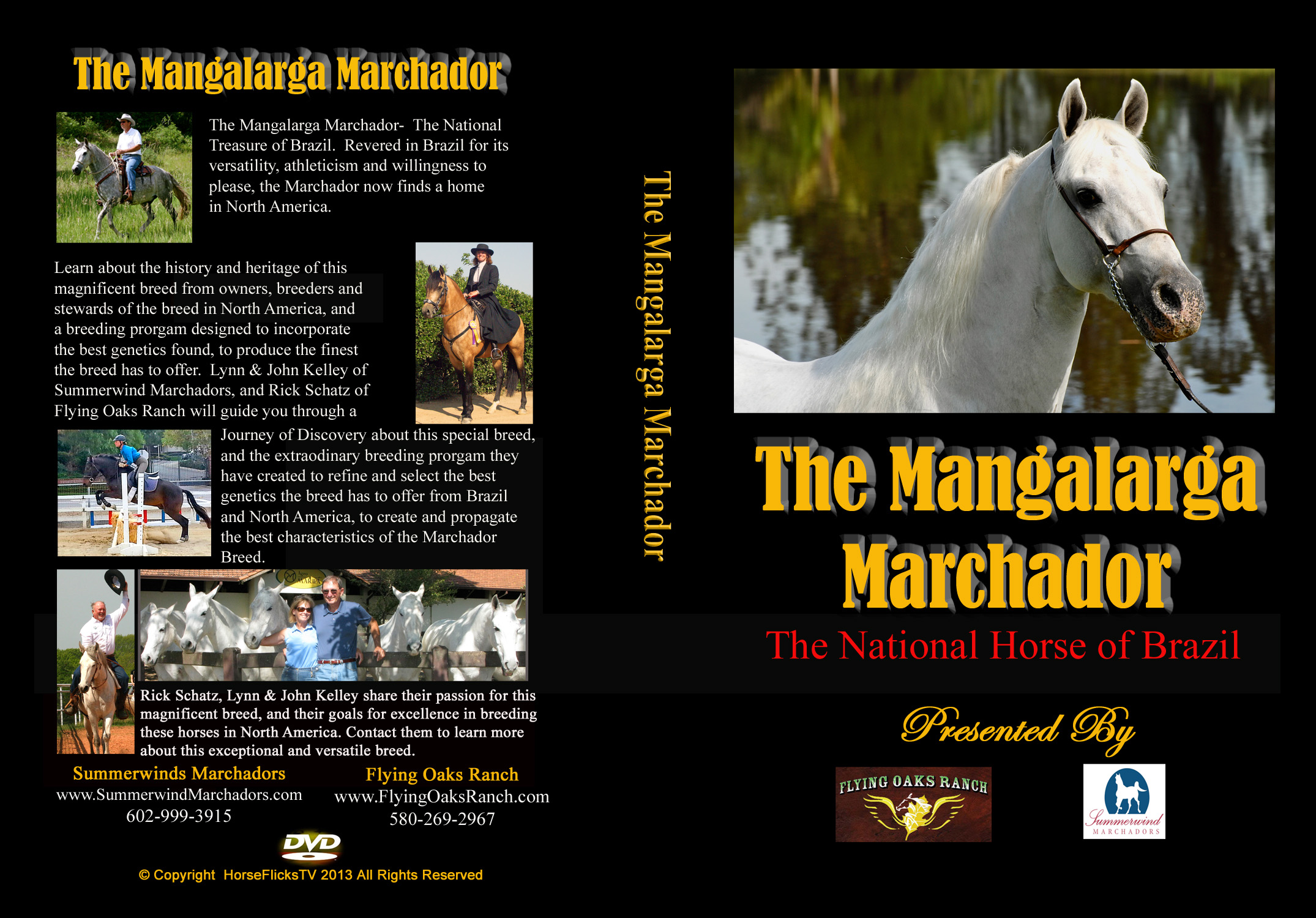 We could not be happier with him.  He’s friendly, confident and showing wonderful gait and temperament of the Mangalarga Marchador breed!   Born chocolate (milk and dark), we think he will shed to black, but may eventually be grey like his sire.

He was code named Hermes, but after he was born, we decided to select a different name.  When hawk feathers were found in his stall, we knew we had picked the right one!

Take a look for yourself!

In 2011, we were unbelievably excited to receive the first shipment of frozen semen exported from Brasil.  Ho-hum, you say.  It happens all the time.  NOT!   We had worked for over four years to see this happen.  There were two main issues.

In Brasil, each breed is regulated by the Ministry of Agriculture.  For this to work, the ABCCMM had to modify its registration regulations, which had previously not allowed the use of frozen semen.  Then the Ministry of Agriculture had to create the rules for exportation for the MM and approve veterinarian clinics for collection and exportation.   To our knowledge, there are only 2 clinics in Brasil that have been approved so far.

The second is that there is not much demand for frozen semen in Brasil.  With so many horses and land, often the preferred method of breeding is still live cover.  For us to get Brasilian Marchador semen, the breeder needed to want to do this for us — for the good of the Marchador breed around the world.

Enter Mr. Marcelo Baptista, owner of Agro Maripa who fulfilled our dream.   Agro Maripa collected and shipped 3 Maripa stallions of excellent quality and impeccable lineage to us in March 2011.

Frozen semen (and later frozen embryos) is very important for the future of the Marchador breed here in the U.S.  Imported frozen semen adds many things:

For us the diversity and quality were the key items.  The excitement is just an added bonus!  We could have an immediate boost in quality in one generation.  For diversity, one could argue that we are okay there for now.  Because we  are fortunate to have many breeding stallions here in the U.S., enough to breed the mares and cross-breed the resulting next generation.  But what about the third, fourth and fifth generation?

We may not be alive to see those MM foals born, but we are doing this for them.  Continued importation is the key for maintaining and improving the quality of the Mangalarga Marchador breed here.  We plan to import more semen, from different bloodlines and make it available  – a semen bank for eternity.