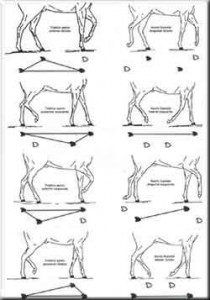 In all of the marcha gaits, due to the moments of triple hoof support and always having one foot on the ground,  there is no upward bounce or total suspension in the air as with a trot or pace. Thus, the rider feels secure and comfortable. The marcha can reach speeds of 14-18km per hour without breaking gait.

Which is better? The marcha picada is sometimes considered the smoother of the marching gaits and the marcha batida the more athletic of the two marching gaits.    But, the gait you prefer is often a personal choice and may be influenced by the discipline you pursue or the terrain where you ride.

Do you want to read more?  Here are two more posts I wrote about gait:

About riding the marcha gait

More about the diagram of the marcha gait –

But, what better way to explain the gaits than to see them in action?


Elo Kafe da Nova is an ELITE book stallion, a national champion and a top reproducer in Brasil. Also in the video are some of his get (filho). National Grand Champion 2005 National Champion Stallion Reproducer 2007–2008

Marcha Batida & Marcha Picada
Listen to the difference. Often if you can hear marcha picada even if your eyes deceive you.

One thought on “The Marcha Gait”