Description:  Quite possibly, the  most beautiful horse we have ever seen, inside and out.

Agro Maripa has produced a genetic line of Mangalarga Marchadors that can best be described as sport horses.  Maripa horses are a blend of Abaiba, Herdade and Bela Cruz bloodlines, although each horse may have more of less of one of the bloodlines.

Maripa’s  breeding program is now proven on long rides (calvagadas) and sporting events, not in the show ring.   Each individual horse is known and tested before the decision is made to use them as a breeding stallion.

Maripa horses were used to recreate a great historical adventure in 2004 of 9,000 miles on the Anhanguera trail in Brazil.     In May 2011, with 2 sons of Oma in Europe,  Marcelo and Sophia rode their 2 stallions on a long ride – 300km in 9 days – on the Camino de Santiago ending at Santiago de Compostela, a medieval cathedral.  (A pilgrimage trail called the way of St James). 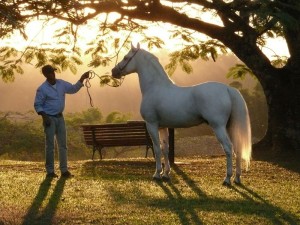