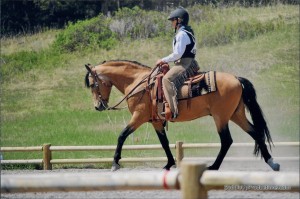 We couldn’t be happier that this year’s big winner was Rox Rogers and La Paz Jivago from Haras Cayuse, MT.   Congratulations, Rox and Jivago!    (wild cheering and clapping!)
Rox and Jivago earned 9 points and thus won the top prize awarded in 2012 of $300.

Western Dressage blends traditional Western riding and attire with Classical Dressage and good horsemanship.  The goal is to have a strong balanced horse that responds happily to the rider’s cues with lightness in both the horse and the rider.   Any breed may compete in Western Dressage.  If you have never heard of Western Dressage and want to know more, Rox wrote about it in more detail for the USMMA Fall Journal and she’d be happy to talk to you about how well her Marchador geldings are doing in this discipline!

Rox is an accomplished horsewoman who always keeps learning!  She owns three Mangalarga Marchador horses.  SW imported La Paz Jivago as a stallion in 2004.  He is a very beautiful, very athletic metallic dunskin.   After freezing semen for our breeding program, he was gelded and is happily living life with Rox in MT. 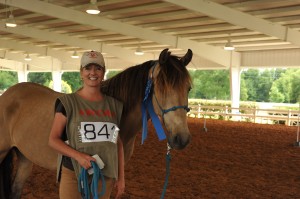 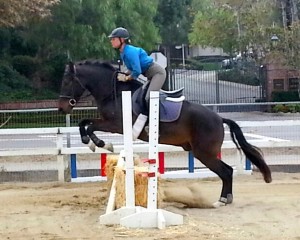 The SW Award Program recognizes your efforts to promote the awesome Marchador breed using a SW Marchador (bred, sold or imported).   Getting our Marchadors in the spotlight – out into national or local all-breed events is not only fun, it helps others to see the quality, versatility and performance of the Marchador breed.   Any horse purchased from Summerwind, their foals or the product of a breeding from or to a Summerwind horse is eligible.  For a recap of the SW Awards program for 2012, click here.