Breed to Violeiro for great gait, conformation, super temperament and a chance for unique color combinations as an added bonus!

“Violeiro is a very docile stallion with good behavior, very easy to handle.   His genetics are from the south of Brazil, the origin of the breed, from Engenho de Serra (the founder of the Herdade bloodline), Porto, Santa Lucia, Bela Cruz and J.B.

His marcha batida gait is smooth and comfortable with good endurance.   Violeiro won, between 2009-2013 over twenty gait and breed competitions which include conformation and functional test, totaling 31 awards in 40 months.    He won many Champion titles including National Champion and Reserve National Champion in Brazil.

(For a full list of competitions, please visit the pedigree page.) 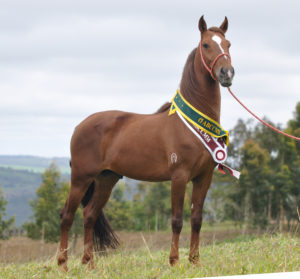 Violeiro do Riomar stands out as a sire, passing on to his offspring a great gait with quick changes of support and excellent diagram of triple support (smooth), morphological beauty, good bone structure and angles, a high setting neck and lots of nobility.   His not so strong points might be a better head and ears.

Violeio has produces well with mare of various bloodlines.”

Click here for Violeiro’s offspring. in North America  (coming in 2020)  In Brazil, there are over 100 offspring so far.

Winning at the National Mangalarga Marchador Horse Expo in Brazil – 2010 and 2011.   For some background, any horse competing here has to be a champion already crowned in another regional competition.   The classes – by sex, gait and age – can have as many as 40 horses in each class competing for the national titles.  It is the largest breed show in South America with thousands of Marchador horses competing.   For Violeiro, the travel to arrive there was almost 1000 miles.   And you can see at the end of the video, that the rider carries the flag of Bahia, for Violeiro won – not only for the breeder and owner, but for the state as well.